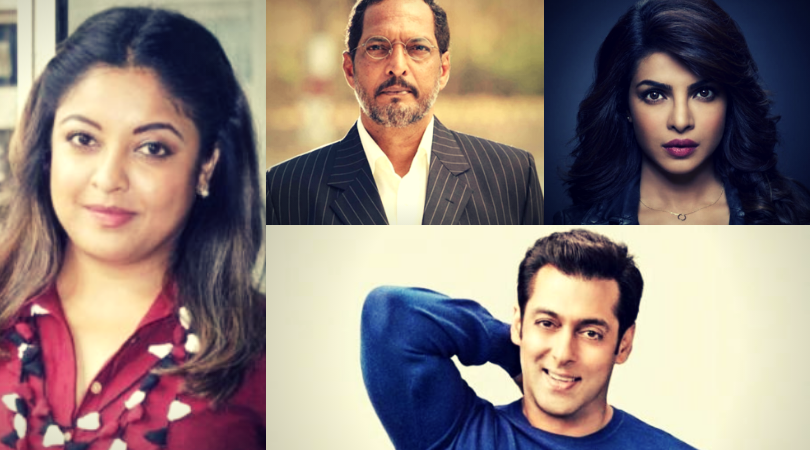 Tanushree Dutta’s latest accusations on veteran actor Nana Patekar have shaken the Bollywood industry as well as the whole nation.

After her confession towards alleged harassment within the industry, several Bollywood personalities such as Farhan Akhtar, Priyanka Chopra, Parineeti Chopra, Raveena Tandon, Twinkle Khanna, Sonam K Ahuja, and Richa Chadha are finally speaking up and have even requested the authorities to take action, stressing that believing survivors is very important.

On the other hand, several Bollywood superstars such as Salman Khan, Aamir Khan and Amitabh Bachchan, opted to duck the question after being quizzed by the media.

Neither my name is Tanushree nor Nana Patekar. So, how can I answer your question?: Amitabh Bachchan on Tanushree Dutta accusing Nana Patekar of harassment. #Mumbai pic.twitter.com/kyqSRnhYJf

#WATCH: "I am not aware of what you are talking," says Bollywood actor Salman Khan on Tanushree Dutta's harassment allegations against Nana Patekar. (27.9.18) pic.twitter.com/02jBofFVn9

On Thursday, the Lucknow Central star Farhan Akhtar came in support for Tanushree, who had revealed that director Vivek Agnihotri and actor Nana Patekar had harassed her on the set.

This thread is very telling. @janiceseq85 was there at the time of the incident being debated today. Even when #TanushreeDutta had career concerns to keep quiet 10 years ago she did not & her story hasn’t changed now. Her courage should be admired, not her intention questioned. https://t.co/Ola3MNdmtS

Patekar, who is charged with sexual misconduct at the shoot of the film ‘Horn OK Please’ 8 years ago will now meet her in the court.

After being the first leading lady to speak on this issue, people in the country and on the social media are getting curious to know about the whole issue after Nana Patekar described Tanushree as “like my own daughter.”

Meanwhile, several Bollywood insiders have stated that Tanushree’s accusations are false and done only to grab the attention of everyone to revive her Bollywood career.

However, there are many actresses like Tanushree Dutta in the Bollywood industry who want to share their true-life stories but they cannot. Also, we cannot forget that this is Bollywood, not Hollywood, home to the #MeToo movement?

Earlier this year,  Telugu actor Sri Reddy’s had protested against the casting couch while some Bollywood actors like Ayushmann Khurrana and Ranveer Singh to spoke about casting couch.

Check out the tweet of the other Bollywood celebrities:

It hurts to be #TanushreeDutta rn. To be alone, questioned. No woman wants publicity that opens the floodgates of trolling and insensitivity.What happened to her on set was intimidation.Her only fault was she didn’t back down-takes a special courage to be #TanushreeDutta.

I believe #TanushreeDatta and @janiceseq85 recollection of the account. Janice is my friend, and she is anything but an exaggerator or a liar. And it’s upto us to stand together. https://t.co/sF3mS5o1P8

If my previous tweet sounds vague let me clarify it. This should stop the questioning of intention of Tanushree Datta because there is a witness account of what happened and @janiceseq85 is as credible as the come .

I agree too. Survivors are survivors because they have dealt with something horrible and come out on the other side. So believe them, respect them. @janiceseq85 #TanushreeDutta

Please read this thread before judging or shaming #TanushreeDutta a working environment without harassment and intimidation is a fundamental right and by speaking up this brave woman helps pave the way towards that very goal for all of us! https://t.co/f8Nj9YWRvE