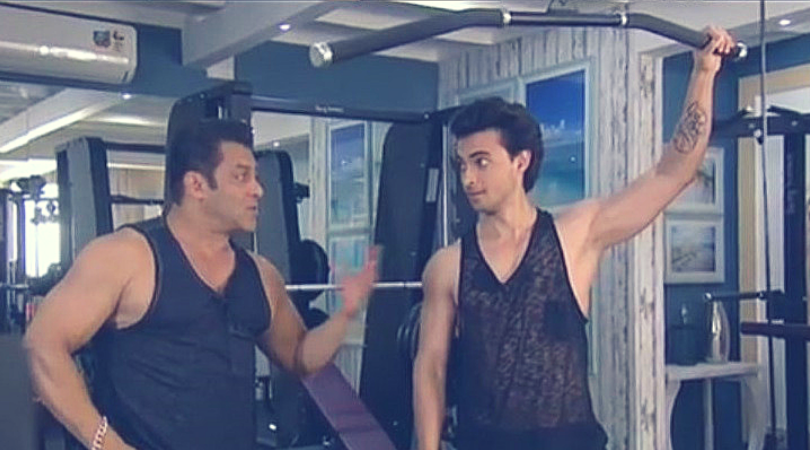 Bollywood superstar Salman Khan’s brother-in-law Aayush Sharma is going to make a big Bollywood debut with musical romantic drama Loveyatri and guess what fans are too excited to see Aayush romancing with debutant Warina Hussain in the movie.

While the songs of the movie are already catching the attention of the audience, you must know that Aayush recently visited the sets of reality show Bigg Boss hosted by Salman Khan to promote the movie.

In the latest episode of Bigg Boss 12, Aayush along with his beautiful heroine Warina shared the stage with Salman who is the host of the show. While the actors did have a gala time with Salman, Aayush too had a fitness session with Khan.

Recently, Colors TV shared a promo in which Aayush is spotted working out with the superstar and thing which surprised us was that Aayush is also a fitness freak like Salman. In the video, you can clearly see how the Race 3 star is pulling the leg of Aayush Sharma.

It is funny when he asks Aayush to work on his back as there are a lot of people who backstab. However, a Bigg Boss can clearly understand the message behind Salman’s jovial remark which was obviously related to participants of this season of Bigg Boss.

From Sreesanth’s walking out rant to Shivashish Mishra’s tight pants, Salman had some punches for his contestants.

Watch and enjoy this entertaining video:

ALSO READ; Yo Yo Honey Singh New Song Urvashi Turns Up The Heat All Over India, Crosses 10 Million Views On YouTube

As per the sources, Nirmal Singh would be evicted in tonight’s episode while Salman announces double eviction in the 2nd week.

On the work front, Salman has already begun shooting for his next with Ali Abbas Zafar’s Bharat.