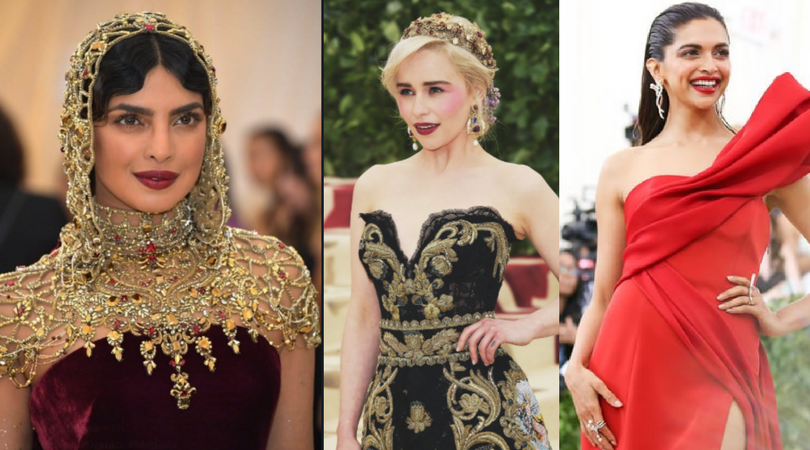 inside the met gala 2018 pic.twitter.com/dSWUwmsvV9

While the celebrities in this year’s event were seen dressing to the theme of ‘Heavenly Bodies: Fashion and the Catholic Imagination.’

Well, the event is conducted to raise funds for  Metropolitan Museum of Art’s Costume Institute.

Further, among all the among saints and sinners, Pope and Jesus present at the event Quantico star Priyanka Chopra and Deepika Padukone stole the show.

Eventually, both the superstars are receiving different reactions from the fans after their pictures were released on social media.

So, let’s check out what our favourite homegirls Deepika and Priyanka chose to wore on the event.

The Baywatch star was seen sporting a wine red strapless Ralph Lauren gown with a billowing train paired with an embellished gold chain headdress along with that she wore a trench coat with a long train which was designed by Lauren. Further, with a subtle make-up and maroon lips, she was an absolute stunner.

Wow! She is looking gorgeous

Priyanka Chopra representing all of us brown girls around the world so beautifully. Proud moment ?? #MetGala pic.twitter.com/fsB6YEa7yy

While Deepika Padukone who made her debut at the Met Gala last year was out of the theme as she was seen donning a sultry red draped gown with a thigh-high slit, which was designed by Prabal Gurung. Further, she accessorised her look with scarlet heels.

When @deepikapadukone arrived at the red carpet of Met Gala 2018#DeepikaAtMetGala pic.twitter.com/xJpsylqoMU

Meanwhile, Check Out the other pictures of the event:

Met Gala 2018 Theme: “Heavenly Bodies: Fashion and the Catholic Imagination”
this is what they meant!!!!
#MetGala pic.twitter.com/EsirLxTu93

His style is great

Well, Whom do you like the most Deepika or Priyanka?