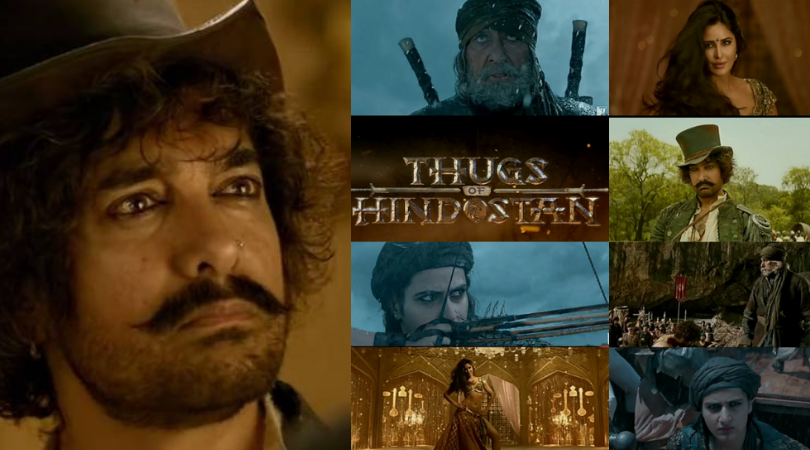 After sharing the thrilling motion poster, the makers have finally released the much-awaited trailer of Aamir Khan starrer Thugs of Hindostan.

Well, Aamir Khan’s upcoming big Diwali release which stars Amitabh Bachchan, Fatima Sana Shaikh, and Katrina Kaif in leading roles are one of the biggest movies of the year and now with the release date so near, the film is all set to break the 1st-day records at the box-office.

ALSO READ: Aamir Khan Reveals The Brand New Poster Of Thugs Of Hindostan, Here’s When The Trailer Will Be Released

Moreover, Aamir who has been introducing the characters of the movie for the last few days started with Amitabh Bachchan’s Khudabaksh, Fatima Sana Shaikha’s Zafira, Katrina Kaif’s Suraiyaa and finally his own character named Firangi.

Well, the 3-minute trailer takes you into the daring world of the thugs where one is deceived as they start to trust. it takes us those times when thugs took on the Indian waters also when freedom was the most expensive thing.

Apart from the interesting plot, the breathtaking stunts and special effects are so stunning that the trailer will definitely fascinate anyone.

If we talk about Amitabh Bachchan, the angry young man of Bollywood is already 75 but his latest performance in Thugs of Hindostan will make the likes of Varun, Ranbir, and Tiger embarrassed. Meanwhile, Aamir Khan’s Firangi which seems to be inspired by  Johnny Depp’s Captain Jack Sparrow is quite mischievous and cunning. Further, Dangal star Fatima Sana Shaikh, who is seen performing those daring stunts loos quite intriguing. Oops! We forgot the lovely Katrina Kaif who is in the frame only to seduce Firangi.

Interestingly, the trailer was also released on veteran director Yash Raj Chopra’s birthday. Moreover, Yash Raj Films chose his birth anniversary date to release the trailer of one of the most ambitious movies of the production house.

What’s your take on Thugs of Hindostan trailer?